Sanou Oumar was born in Burkina Faso, West Africa. He graduated from the Ouaguadougou University in 2007 with a major in English Literature. He went on to receive certification in English at the British Consul in Dakar, Senegal from 2007 through 2010. Sanou came to the United States in 2015 in order to pursue his freedom and desire to become an architect. To date, he has engulfed himself in drawing highly intricate designs in order to satisfy his drive for linear perfection.
Ever since he was a child, he states he has been fascinated by buildings and diverse forms of structure and architecture. His drawing is clearly influenced by a disciplined mind: the discipline of geometry, steadfastness and the inspiring landscapes generated by his homeland and fertile imagination. He claims that the execution of his drawings makes him feel whole and powerful; feelings he was unable to attain within the constraints of his culture and home country. The concentration required to complete his drawings overtakes him and allows him to fully express himself, without distraction or outside restrictions. There is a compulsion to organize his material, giving him a strong sense of self. He explains that the attention to detail frees him from the stresses of his life as a refugee and seeker of asylum in the U.S. He strives for visual perfection as a form of reframing his life and coming to terms with the disorganization of his past. 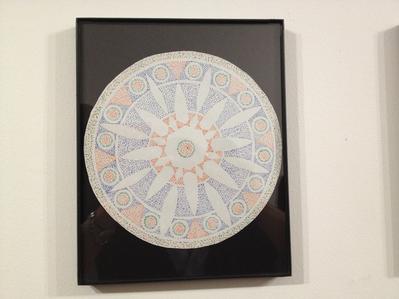