All Items / Books / Down East: An Illustrated History of Maritime Maine

Down East: An Illustrated History of Maritime Maine

From the first explorers, to the century of ships, to our modern fisheries and diversification, Maine's maritime story is told in engaging detail. Lincoln Paine has laid down the framework for an understanding of Maine's maritime history by relating the population and landscape of today to their historic foundations.

This engaging overview of Maine’s maritime history ranges from early Native American travel and fishing to pre-Plymouth European settlements, wars, international trade, shipbuilding, boom-and-bust fisheries, immigrant quarrymen, quick-lime production, yachting, and modern port facilities, all unfolding against one of the most dramatic seascapes on the planet. "Down East" can be read in an evening but will be referred to again and again. When the first edition was published in 2000, Walter Cronkite―a veteran Maine coastal sailor as well as The Most Trusted Man in America―wrote that “Paine’s economy of phrase and clarity of purpose make this book a delight.”

Paine went on to write his monumental opus, "The Sea and Civilization: A Maritime History of the World" (PW starred review), but now returns to his first and most abiding love, the coast of Maine, to revise and update this gem of a book. The new edition is printed in a large, full-color format with a stunning complement of historical photos, paintings, charts, and illustrations, making this a truly visual journey along a storied coast. 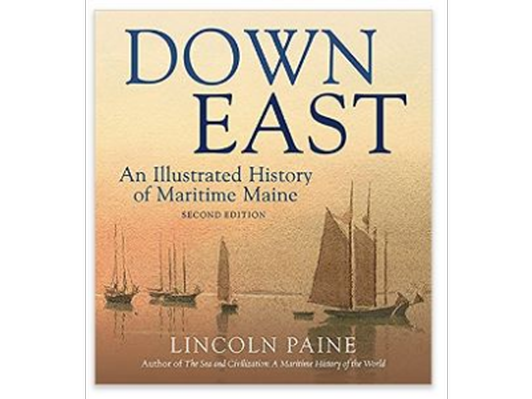