All Items / Tickets and Travel / Three Nights in Chicago including hotel, dinner, and theatre

#1 Three Nights in Chicago including hotel, dinner, and theatre

Join us in CHICAGO, “our kind of town”, for theater, dining and a bit of taking in the sights.......hosted by Ray and Judy McCaskey.

Included in the package is a three-night stay at the boutique Whitehall Hotel, just off Michigan Avenue. Highlights include two dinners, one at a French bistro and one at the two-starred Michelin restaurant ACADIA, chef-owned by the McCaskey’s son Ryan. Cultural delights include ticket to the current production at Chicago’s Shakespeare Theater with the possibility of a back-stage tour. Explorers of this bold city can sign up for the Chicago Architectural Tour (between 4-01-21 and 10-15-21), visit the world-renowned Art Institute of Chicago, stroll through Millennium Park with the Frank Gehry Band Shell, Anik Kapoor sculpture and the Crown Fountain.

The package will be offered at MUTUALLY AGREEABLE DATES, with the winning bidders and the McCaskeys, at a time deemed totally SAFE to Travel, by the CDC.

IF you haven’t visited Chicago in a while, this is an opportunity, with insider city tips from folks who live in and love Chicago!

Value—Priceless....Minimum Bid $1,800. Airfare/ travel to and from Chicago is NOT
included. We look forward to seeing you in Chicago! 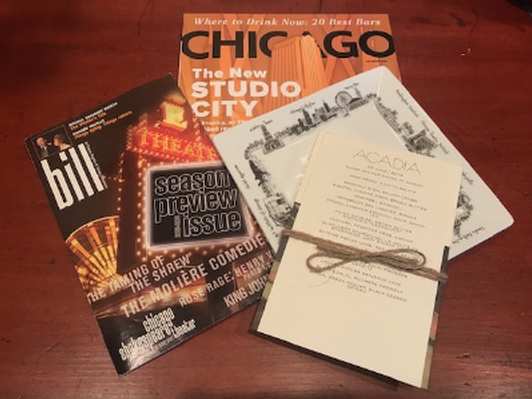